We have also learned that Mr. Emadi was already offered some B.S.  “plea deal,” which he smartly turned down. Subsequently, Andy-boy, in a retaliatory tantrum, issued this “direct complaint” against the young man. Andy thanked the Phoenix Police for, “prevent[ing] the disturbance from escalating.”

This likely means the charges against Mr. Garyn Klasek and Ms. Claire Brock will be dismissed on Friday at a scheduled status conference (of course, not without first being presented “deals” to plead guilty to crimes Maricopa County knows it cannot prove). But with Maricopa County, who knows what may happen.

We’ll follow this story until all five individuals are exonerated of this persecution. 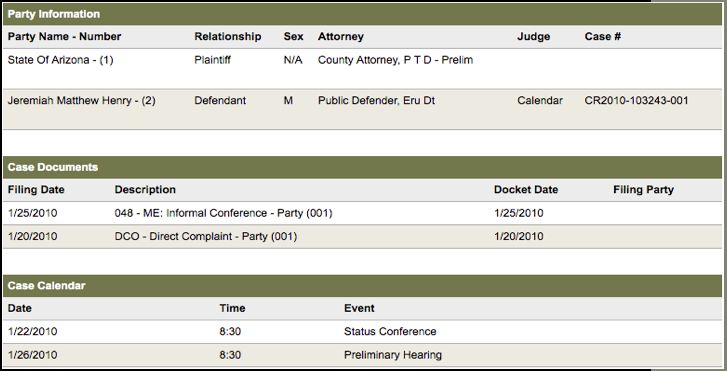 It appears that this same “already happened informal conference” is the case for Mr. Emadi as well. Interestingly, there is no record of charges even being filed against Mr. Klasek.

You all must be aware that this is just the first sign you’ll need to know that cases in Maricopa County are pre-determined, no matter the evidence or circumstances.

Here is more video from the scene, showing the sheer brutality of Phoenix Police arresting one of the female protestors.

Also, an Arizona Indy Media article contains photos and hard evidence that undercover Arpaio goons or Phoenix Police goons posed as protestors throughout the day. Phoenix Police have denied this, but you can see plain-clothes individuals from the video above and the pictures from the Indy Media article of the same individuals arresting and assaulting the protestors. More evidence that this entire incident was provoked by so-called “law enforcement.”

We will keep you up-to-date on the legal proceedings for all the individuals. 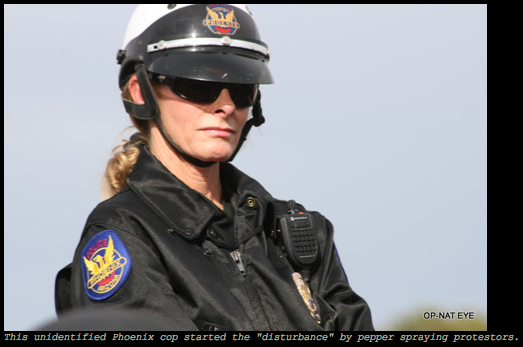 Dare I say the “white” people at yesterday’s rally against Maricopa County Sheriff Joe Arpaio were targeted by police?

It’s kind of difficult to see it any other way after witnessing what appeared to be an unprovoked attack by Phoenix Police on protestors who were getting under their skin with taunts and various signs expressing how they felt.

Earlier in the day at Falcon Park in west Phoenix, the group of young people, clad in all black with burka-style face coverings, carried a sign which said, “Indigenous People For Migrant Rights And Dignity.” I am only assuming this is the name of their group.

As “mainstream” media continue to report only what Phoenix Police say happened – that these young people “assaulted” and threw bottles at cops – Operation Nation was also on the scene and spoke to several witnesses, some of whom were actually hit with the pepper spray.

First, here is a report from ABC-15 about the “disturbance.”

I understand that “mainstream” media must always take the side of police so they will continue to have all-access to arrest records, mugshots (e.g. the people who were arrested yesterday), and whatever other juice they desire to obtain from them. What is missing from this report and all others in the city is the name of the female, overzealous, robocop that started all the mayhem.

Here is what witnesses said about yesterday’s incident.

Organizers of the rally quickly separated themselves from the group, saying they were there for “their own purposes.”

These five individuals will now have to sit in a Maricopa County Jail until someone either bails them out and/or they are released on their own recognizance; all because of the ego trip of a female cop who obviously can’t handle her job. Their lives will also now be forever altered, if these alleged “felony charges” stick.

Operation Nation will try and follow this story and keep you updated on each individual case.

UPDATED 1/18/2010: Lost in the Phoenix Police thuggery was the overall festive, spiritual atmosphere from the day’s events. Here is a slideshow of photos we took.