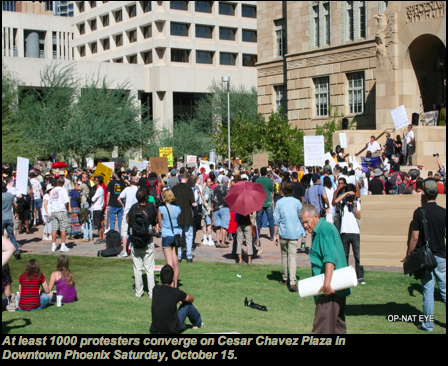 Then Saturday came. Occupiers began the day at Cesar Chavez Plaza, which houses several Phoenix city and Maricopa County offices. The crowd was forced by police to move to Margaret T. Hance Park, just north of downtown, because police said the plaza closed at 6pm. Police then said the public park closed at 11pm and all occupants had to leave the area. When protesters refused to relinquish their First Amendment rights to free assembly, police moved in with riot gear and a helicopter, and arrested 45 peaceful people.

Phoenix Mayor Phil Gordon said if anyone was arrested for participating in Occupy Phoenix, he would show up and be arrested with them. Needless to say, he never showed up. But the OP-NAT EYE has learned that at least 10 of the protesters had the charges of criminal trespassing dropped against them because the arresting officers failed to put their names and badge numbers on the police reports.

Since the only witnesses to the “crimes” were the arresting officers, and since there were no officers identified, the charges had to be dropped. This could very well be a genuine oversight or a silent show of solidarity from police who maybe did not want to arrest people exercising their Constitutional rights. All of the protesters were released from jail within 24 hours, however several of them could not retrieve their confiscated property until Monday and/or today.

Meanwhile, 60 or so protesters camped out on the sidewalks downtown last night, as police are still not allowing people in Cesar Chavez Plaza after 6pm. The sidewalk has a food and water station (complete with pizza, Nutra-Grain bars, and several kinds of potato chips) and even an electric generation station for people to charge their cell phones and laptops. The central themes of Occupy Phoenix continue to be repeal of the Federal Reserve Act of 1913, anti-corporate corruption, and anti-lobbyist.

We will continue to bring you coverage of these events as often as possible.