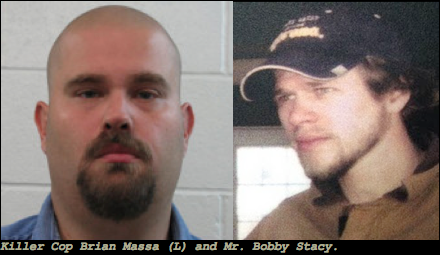 CASSVILLE, MO — Former Southwest City, Missouri cop Brian Massa used to be part of a Facebook group called “I don’t need anger management…you just need to stop pissing me off!!” Massa will now have plenty of time to address his issues behind bars.

A Barry County jury convicted the killer cop of first-degree involuntary manslaughter last Thursday, nearly two years after Massa killed Mr. Bobby Stacy. The defense told the jury that Massa was forced to shoot Mr. Stacy on March 28, 2010 because Stacy “tried to run [Massa] over.” Massa was pursuing Mr. Stacy in a Chevy Suburban he allegedly stole, they said. The chase ended when Stacy crashed the vehicle into a ditch east of Southwest City. Massa said Mr. Stacy tried to “run him over” after he exited his police car, thus was forced to shoot the 26-year-old Stacy.

The dash-cam and body cam on Massa’s uniform told a completely different story. Missouri State Patrol, who led the investigation, also said early on that Massa’s story did not match the evidence. Common sense prevailed with the jury, since the fatal shot hit Mr. Stacy in the back of the head. Evidence showed that all of the shots were fired after Mr. Stacy crashed the vehicle and was disabled and/or while Stacy was fleeing in the SUV.

“It was hard for me to breath [after the verdict was read],” Ms. Claudia Moss, Bobby’s mother, told the OP-NAT EYE. Sources who attended the trial told us that several of Massa’s fellow cops and friends looked “shocked” when the guilty verdict was read. One of those friends, McDonald County Chief Deputy Harvey “Bud” Gow, has a bar-code tatooed in the back of his head like the one Agent 47 from the assassin movies and video games “Hitman.” 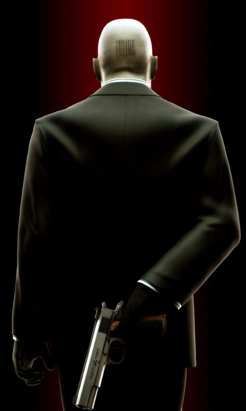 Not only does Gow’s tattoo speak to the mentality of law enforcement in McDonald County, but Massa was dating his daughter at the time of the shooting.

We’ve also been told, by an individual who has seen the dash-cam video, that Massa and other cops from Southwest City and the McDonald County Sheriff’s Office can be heard “laughing and joking” while Mr. Stacy lied there dying. The tape also catches Massa saying it took him three tries to kill Mr. Stacy, which prompted another cop (who we’ve been told is Gow) to say “it wouldn’t have taken me that many times.” Massa was asked during the trial if he tried to shoot out the tires to stop the alleged moving vehicle. He responded, “no, we are trained to shoot-and-kill.”

Massa became the first police officer in the state of Missouri to ever be tried and convicted for an on-duty killing. The sentencing is scheduled for January 6. Though Massa faced up to seven years in prison, the jury recommended he serve three.

“I think he should get a lot more than that,” Ms. Moss said. A wrongful death lawsuit is forthcoming.