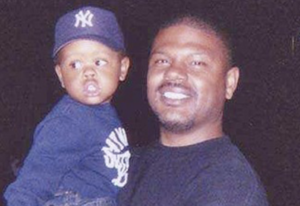 UPDATE: The thug cop who murdered Mr. Collins is “Deputy” Kevin Brown of the LA County Sheriff’s Department. The killer was never charged with a crime. The Collins family received an insulting $900,000 settlement from LA County, which means they probably received about $450,000 about lawyer fees. Sheriff Lee Baca instituted “changes” to policy that amount to nothing more but lip service.

Mr. Darrick Collins, 36, and his friend Mr. Jay Johnson were talking in the driveway of Mr. Collins’ home in the unincorporated town of Athens on September 14. While the two men were talking and minding their own business, police thugs from Los Angeles County pull up and ask the men “what are you doing?” Mr. Collins, sensing malice and not in the mood for this sort of harrassment that happens everyday in America, tried to remove himself from the situation by walking to his backyard. As he walked away, the rabid police thugs, who’s name are being protected by their government, opened fire without hesistation on Mr. Collins, hitting the father of two at least three times in the back, killing him instantly.

The police thugs who murdered Mr. Collins, of course, were rewarded with paid vacations which will last at least 90 days. The spokesperson for the murderers, “Sergeant” Diane Hecht, used two different excuses the Euro-American community have accepted as “fact” for centuries when police use them to justify murder: Mr. Collins and Mr. Johnson “fit the description” of two alleged armed robbery suspects (meaning they are “black” and “male”) and that Mr. Collins was “reaching for his waistband,” apparently for a gun. But according to several media outlets, there was no gun or any other weapons were found at the scene, except for the ones the police thugs used to murder Mr. Collins.

The Euro-American community is so frightened and insecure with their own lives because of President Barack Obama’s victory in 2008, they cheer and root for their “hero police” any time they murder yet another Nubian (which they call “blacks”). Granted, the Euro-American community has always cheered when police thugs murder “black” Americans, but the vitriol on Euro-American media message boards nowadays says all you need to know about this community. “Blacks” are not humans, thus are disposable to this community. One comment says, “one less burden on our welfare and justice system.” Another says, “whatever caused the cops to shoot….GOOD FOR YOU. No court costs associated with this guy, nice.”

“Black” Americans know exactly how Iraqi citizens feel. Both have occupying armies driving up and down the streets (in Iraq, its in Hummers and tanks; in the USA, its in police cars) with several heavily-armed Europeans inside who can murder you without hesitation and not face any sort of criminal penalties. Again, it is LEGAL in the USA for “whites” to murder “blacks,” and there is no arguing that.

Operation Nation will immediately publish pictures and the names of the murderers as soon as we learn them. Our thoughts are with Mr. Collins children and family.