Euro-American homosexual culture has continued its rapid 21st century ascent towards being a preferred and accepted lifestyle in the United States. President Barack Obama has shown an affinity for homosexuals in America and several U.S. television sitcoms and dramas have homosexual characters. The culture continues to clash, however, with non-European people.

The latest cultural immiscibility happened in the form of a lawsuit filed in the United States District Court of Eastern New York on June 21. Ms. Marie Domond filed the complaint on behalf of her brother Gerard Domond, who is incarcerated in a Dannemora, New York prison labor camp. The complaint alleges that the New York Department of Corrections is defaming and causing mental anguish to Gerard by referring to him as an “inmate.” The complaint, which seeks $50 million in damages, says the word “inmate” suggests homosexuality (in  jail  to mate with men) and is “character assasination” of her brother.

Here is part of the complaint.

I spoke to Ms. Domond briefly, and judging from her accent and the fact that public records indicate Gerard is “black,” it is safe to assume the Domonds are Caribbean Americans. Nubian nations (i.e. most of the Caribbean) have all for the most part expelled the homosexual culture left over from centuries of imperial European genocides (“colonialism”). Euro-American media have called Jamaica the most “homophobic” place on Earth because of its rejection of homosexual culture.

The pro-se lawsuit will be dismissed for failure to state a claim which relief can be granted, mostly because of cosmetic and procedural issues in the complaint. The complaint does not make clear whether Gerard has “exhausted” the prison grievance show (which is required per the PLRA). There is also no evidence that the state torts of negligence, defamation, and emotional distress have been exhausted with the New York Department of Corrections. Further, the complaint has no jurisdictional statement, does not name Gerard as a plaintiff, and it does not properly allege a federal Eighth Amendment violation.

Once the complaint is amended, the questions will become 1) whether the word “inmate” is truly a reference to homosexuality and 2) does that constitute “cruel and unusual” punishment? For the sake of argument, even if a judge rules that “inmate” denotatively equals “homosexual,” it is difficult to imagine a U.S. federal judge ruling that being called “homosexual” is cruel and unusual.

This type of lawsuit is not unprecedented, and the previous case made international headlines. Dimitris Lambrou filed a lawsuit in a Greek court in 2008, asserting that the citizens (men, women, and children) of his native island of Lesbos are the only true “Lesbians” on the planet. 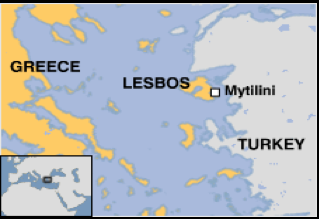 He sued a homosexual group in Greece and sought an injunction blocking them from using the word “lesbian” to describe homosexual women. 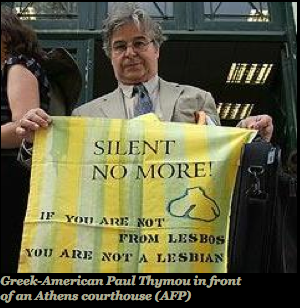 Lambrou ultimately lost in the Athens appellate court, but said he will appeal to the European Court of Human Rights. Homosexual European women frequently vacation to Lesbos and consider it their zion (so to speak) because the Ancient Greek female poet Sapphos (from Lesbos) wrote poems about her homosexual acts. Sapphos had been married to a man and had children, however. Ancient Greece was a society where the men preferred sex with other men (and young boys), and cast women away from their boys club society, which created the convenience of female homosexual sex.

European Americans and U.S. media deny homosexual culture originated in Europe, and that it is a European culture. Conversely, Russians (the “other” Europeans) rationally own the fact that homosexuality originated in Greece. The facts remain that homosexual acts are criminal on most of the Nubian (“African”) Continent, in all of the Muslim world, and Russia de-criminalized homosexuality in 1993, but still bans homosexual marriages. Euro-Americans and Europeans argue it is “racist” (even though “gay” is not a race…and its Europeans v. Europeans) and inhumane to incarcerate homosexuals. The United States, however, incarcerates hundreds of thousands of “black” men for smoking marijuana; an African-Caribbean culture.

The Domonds’ case is likely headed for the same fate as the Lesbos case simply because the United States is taking its natural course of accepting and “normalizing” the European homosexual culture. The United States deems any culture which is non-European (“African,” Mexican, Muslim) to be savage, alien, and terrorist, respectively. A U.S. court will never give deference or even objective consideration to innately “African” claims v. innately European ones, which combined with all the foregoing, make the Domonds’ case ripe for dismissal.

There’s been no answer to the complaint filed by New York D.O.C. as of today, and the case has not been dismissed.