Mr. Lonnie Graham, a 28-year-old father of two, was murdered in cold blood by Fresno police thugs on September 23. According to a witness, Celeste Rodriguez, Mr. Graham exited the back door of his home when he realized police were there. As soon as he opened the door, the police thugs opened fire on him, killing him instantly. Ms. Rodriguez said Mr. Graham was murdered right in front of her 14-year-old son and 11-year-old daughter. Mr. Graham was unarmed. 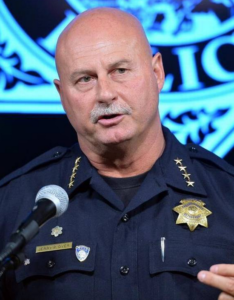 Police Chief Jerry Dyer says his officers saw a “shiny, metal object” in Mr. Graham’s hand. Dyer than tried to make it sound like Mr. Graham wanted police to shoot him. Dyer summed up his press conference with this vile statement: “We don’t have a policy, written or informal, that causes our officers to believe to shoot to kill.” In other words, Fresno cops can murder with impunity. The two police thugs that murdered Mr. Graham – Joshua Bowling and Alfonso Castillo – were of course rewarded with paid vacations, likely to last 90-plus days.

Readers commenting on Euro-American media websites about this story keep making reference to Mr. Graham’s physical appearance (he has several tattoos on his face) and the fact he was a “Bulldog gang member,” and thus, deserved to be killed.

I personally don’t like Euro-males with bald heads and delusional egos, nor do I like the appearance of badges, swastikas, bed sheets, or Confederate flags. Using the logic of copsuckers, I then have the authority to shoot and kill all the aforementioned people who have any of those characteristics. Gang members like KKK, Nazis, Hell’s Angels, Sons of Confederate Veterans, and Council of Confederate Citizens can also be shot and killed, according to the logic of Fresno police thugs and copsuckers as it pertains to black and brown people.

All police thugs have to do nowadays is say “he was a gang member,” “we feared for our lives,” or “we thought he had a gun” to murder American citizens and get love and accolades from the copsucking community.

Our thoughts are with Mr. Graham’s children and family.