The Bay Area Transit authority apparently let the 45 day window expire that they are afforded by law to pay the original $25 million notice of claim served on them by the Grant’s in January. The Grant’s should not settle for a penny less than the full $50 million. Thug cops and the cities that house them obviously need to see (and lose) a precedent setting, potentially bankrupting lawsuit like this to stop all the nationwide murders and malicious arrests which mostly target “black” men. Nothing will bring Mr. Grant back; but the young man’s lost life can go a long way in eliminating thug cops from our police forces in the United States. Meanwhile, terrorist Mehserle remains free on bond.

I’m still curious to know how a Light Rail rent-a-cop can afford a $3,000,000 bond? And afford the same lawyer who is representing Barry Bonds in his March 2 perjury trial? Apparently his police pals donated the remainder of the blood money the Mehserle family couldn’t come up with. This piece of trash needs to be put to sleep. To all the “bad-ass” alleged “bloods and crips” and whatever else out there: you’re tough and strong when you’re killing one another.
When it comes to killing those who will kill your brother, mother, or father, AND GET AWAY WITH IT, none of you can be found. You’re willing to go to prison over a few thousands dollars and/or a woman. Why not for simple pride and nationalism? Since the U.S. government is not going to do what’s right, and gas-chamber this scum, somebody else has too. I’ll shake the hand of that man or woman who does, and they’ll be forever lionized in the court of public opinion, especially Nubian America. 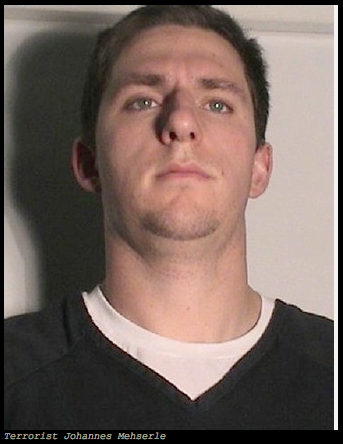 TERRORIST MEHSERLE’S BOND SET AT $3 MILLION
The question now: will the terrorist be able to post this bond? He has already somehow hired big-ticket defense attorney Michael Rains, who will also represent former San Francisco Giant Barry Bonds in his March 2 perjury trial. I cannot imagine terrorist Mehserle has anymore penny jars to empty. Alameda County Superior Court Justice Morris Jacobson deserves praise for the high bond, but I still think this murderer should be held without bond until he’s executed.

Read the entire text of the motion filed by Rains on behalf of Mehserle. 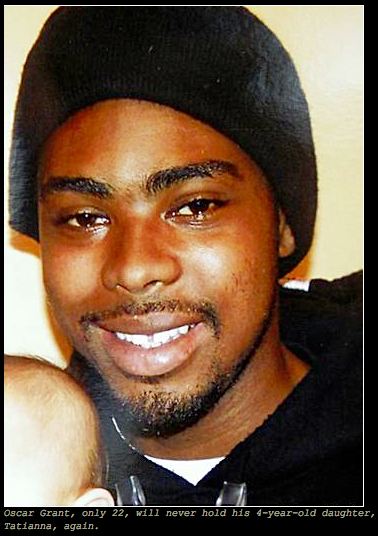 HERE IS THE VERY DISTURBING VIDEO OF THE MURDER, WHICH WAS CAUGHT BY SEVERAL CELL PHONE CAMERAS.

Mehserle is scum; a wild, rabid animal not deserving of humane treatment. There is no need for a trial, as everything is cut and dried. Bay Area Transit, along with the City of Oakland and other municipalities which may be liable, should be ordered to pay the $25,000,000 claim immediately by either Governor Arnold Schwarzenegger. There is no question murder under color of law took place this past New Year’s Eve. A message needs to be sent.
Radical Christian terrorists, along with badged-terrorists and Confederites, have been allowed to murder the people Euro-American media and government deem “blacks” since bondage was outlawed in the late 1860s. And because these radical Euro-American terrorists can get away with murder, it gives the second string of radicals, like Louisiana prosecutor Reed Walters, former Senate Majority Leader Trent Lott, Iowa Congressman Steve King, and countless other white-collar Euro-American terrorists, confidence in carrying out their thug-style agendas under color of law. Radical badged-gangsters always get “paid administrative leave” before being acquitted of obvious first-degree murder charges in U.S. courts. They got the first part right, in postponing terrorist Mehserle’s bond hearing, as he needs to be held without bond until execution. The hearing is now set for Friday, January 30th.
Police murders of “blacks” have replaced the pre-1960s radical Euro-American male obsession they called “lynching.” According to Ralph Ginzberg’s book “100 Years of Lynchings,” no “white males” were ever convicted of murder in the 5000-plus “lynching” cases he documented from 1870-1970. This is no different from what Israel has been doing to the Palestinians not only recently, but ever since the United States and England placed Israel on that little Egyptian/Palestinian peninsula in 1948. Reaction to the murders by Euro-American media is similar between the two as well; it is a tragedy when ONE Israeli is killed in fighting, and passing news when 500 Palestinians are killed. In the United States, ONE Callie Anthony, one Natalie Holloway, or one Jon Benet-Ramsey will halt the presses for years at a time. It won’t be stop the press time for Mr. Oscar Grant until yet another U.S. court acquits yet another radical, Mehserle, of murder charges.
The terrorist has now hired the same lawyer who is representing Barry Bonds in his BALCO perjury case. My question is, how can a terrorist afford an attorney like that on a BART security salary? According to the San Francisco Chronicle, defense attorney Michael Raines has represented other terrorist cops and gotten them off with acquittals or mistrials. Though I respect the fact Raines is only doing his job, “blacks” are the only Americans who can be murdered by terrorists and not cause an instant international crisis. Good luck to Mr. Raines and playing the game of U.S. Justice System. But if Nubian Americans ever want to start feeling completely free from Euro-bondage and its 21st century residue, Mehserle and all these terrorists need to get the death penalty one way or another.