This is Day 1 of the 55 days I spent in Maricopa County Jail.

It was about 4 a.m. on Tuesday, July 22 when I was put into a cold, empty cell; not knowing what was going to happen next. I assume it was located at the Tempe police complex near 5th Street and Mill Ave. I was really tired, but had no intentions of sleeping in there. I went down to my knees, faced a wall, and just stared blankly at it for who-knows-how-long.

An hour or so later, a female cop came by and opened the cell door, placing a tray of food there. She said, apparently jokingly, “it’s free.” I didn’t eat any of it as I had no idea, still, what these people and this organization were trying to do to me. Another female cop then removed me from the cell again to get all my fingerprints. I asked her since when was it legal to extort and rob someone and when did it become illegal to protect yourself? She said, “if you don’t shut up, I’ll put you right back in that cell.”

I was then moved to a two-person cell with two bunks. I did the same thing I did in the previous cell; rested on my knees and stared at the wall. What was different this time, however, was the fact there was another person in there with me. He was a European American who smelled like he didn’t even know what soap or deodorant were, had a weird mohawk hair-do, and clothes that looked like he got them out of the back of a garbage truck.

“What are you here for?” he asked. I wasn’t in the mood for conversation so I didn’t answer him. He began just talking endlessly with little response from me. “I turned myself in on a warrant,” he said. “I’m homeless and hungry, so I figured I’ll just come to jail. At least I’ll get a couple meals everyday and can get out of the heat.” I ended up briefly describing why I was there to him.

“Oh man, you’ll get ‘O-R’d’ probaby,” he said. O-R was the first new term I learned in this experience. He believed, judging from what he heard from me and his own criminal experience, I would be released on my OWN RECOGNIZANCE (O-R).

I was finally removed from the cell and told to line up in this hallway with about 20 other people in it. I was handcuffed, shackled and led out to a bus. ‘Where were these people taking me?’ is all I could think about. It was now Tuesday morning; a day I had planned on paying my tuition and enrolling in the final 12 credit hours I needed to graduate from Arizona State University in December.

The bus ride seemed really long, though I’m not sure of the duration. You couldn’t see where you were going because there were no windows. It made several stops, dropping two different people off at two different places. It was so hot in there I thought I was going to pass out from heat stroke. Yet, there were several guys on there laughing and joking, as if they were accustomed to the whole thing.

When the door finally opened again, a male officer instructed the remaining four people in there, myself included, to get out and follow him. It was a short walk from the bus to this door that, when it opened, revealed something I had only seen in movies. It smelled so bad I thought I was going to throw up; and it looked like a concrete version of the Department of Motor Vehicles on a really busy day. There were several “windows” individuals would go up too, though I had no idea what they were doing at them.

My name was called and I went to a desk where a very rude, creepy-looking guy began asking me several questions about my health. “Are you on any medications?” “Where do you get them?” “Are you currently sick or injured?” I then walked down the long walk way, passing all the “windows.” A male officer then told me to put my hands against the wall, and he slid his hands all over my body like I would never allow another man to do. The bald, fat officer with one of those ancient European-looking curly moustaches, asked me, “why are you squirming around like that?” I didn’t say anything, yet he continued “better get used to it.”

I was then placed in this “holding cell” which was maybe 400 square feet, yet about 50 people were in there along with me. I was really thirsty and wanted some water, but when I saw that the sink and drinking fountain were connected to the toilet, I quickly changed my mind. This sink/toilet/drinking fountain design would be all I would see for the next 55 days. 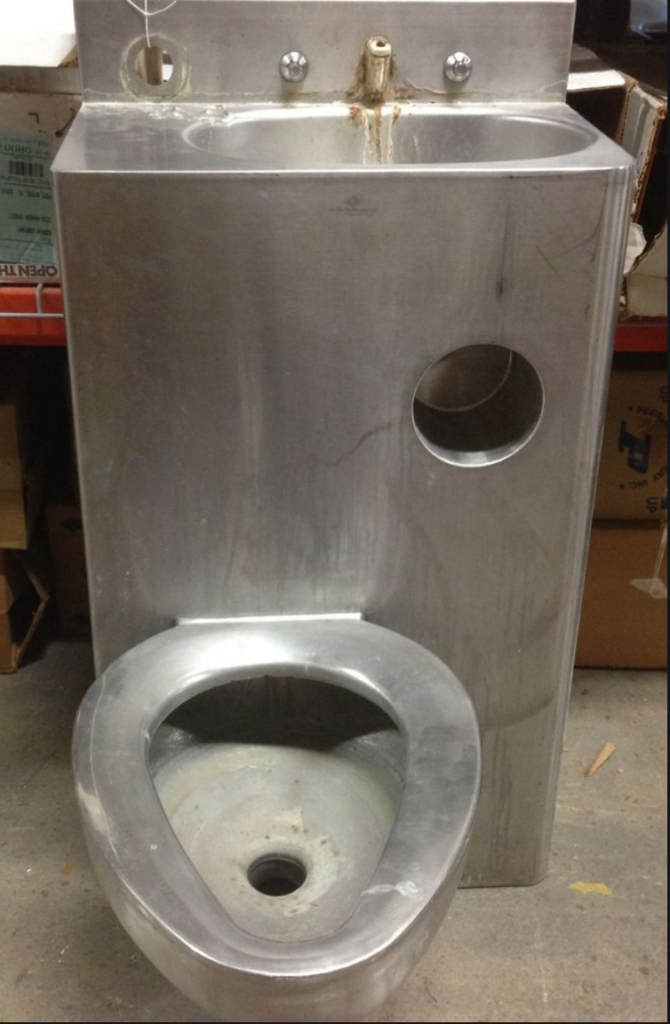 TRUST ME, IT WASN’T EVEN THIS CLEAN.

A female officer came by with plastic bags filled with various food items; really runny peanut butter in a plastic container, bread resembling french rolls, sandwich cookies, and one of those little containers of punch that look like a little plastic barrel. I ate none of the food, but was so thirsty, drank the punch in two or three swallows. I was then taken to another room, where I was given this card, showing me what I was being charged with.

I didn’t even know what to think when I saw all those Class 3 and 4 felonies, except for how and why? After more fingerprints and DNA was taken from me, I was returned to the “holding cell.”

There was an interesting, talkative bunch in this “cell.” One kid, only 21-years-old, told everyone how he was in there because he abandoned the military and he was waiting for military personnel to come pick him up and apparently take him to their special court. There were these two kids, only 18-years-old, who had crashed through someone’s house with their car, fled the scene, broke into another house to watch TV, but ran out of the second house when the woman who lived there fired several shots at them. It was one of them who told me this place we were in was called “The Matrix” and that we would probably be here for days until “we’re classified.” HUH??

Two “holding cells” and nearly 8 hours later, I was finally led to a court room around 530pm. I had waited for this moment, thinking I would finally get out of this place and file charges against the guy who tried to rob, extort, and stab me. When I saw the judge, Miles Nelson, “O-R” the two kids who had crashed through a house with their car and broke into another house, I knew I was leaving too. But when I approached the bench, a woman from the state stood up and said “because a gun was involved, I think the bond should be at least $50,000.” When Nelson concurred, making the bond $54,000, I asked him, “I had to defend myself…since when is that illegal?” He replied, “the state will decide on the charges…good day.”

I obviously did not have $54,000 and was now in a state of numbness. I was led back to yet another “holding cell,” again maybe 20 X 20, but this time, there were over 70 people in it; room for you to sit or stand completely still. The smell, again, resembled raw sewage, and was not helped by several individuals moving their bowels at the only toilet in the room. I called my mom maybe hoping for a miracle as far as getting the bond posted, but I knew she could not. The “food person” came by again with those plastic bags with identical food items in them from earlier. I again, only drank the punch, as my stomach hurt so bad at this point because of what was happening to me and the smell in there.

I was now approaching a state of catatonia, not knowing what was going to happen next. All I could think about was how I missed out on my enrollment at ASU and how I was to start my job at the University of Phoenix on Monday, July 28; a job I was very much looking forward to starting. But this “cell,” this smell, and these 70+ people, mostly ex-cons, would be my reality for the next 18 hours.

“The Matrix” is located at the Maricopa County 4th Avenue Jail.