Not sure what constitutional grounds (ineffective counsel, obstruction of state officials, etc.) the rapist thugs plan to present on appeal, but its their right to do so. Both of them, who are now deemed “indigent” because of their incarceration, will be appointed public defenders for appeals. The best case scenario these two are hoping for is that the Iowa Supreme Court reverses all or parts of the sentencing and remands it back to the Superior Court for further proceedings. But unless there was some grave error (or malicious act) by the prosecution or the defendants’ PAID counsel, there doesn’t appear to be much ground for appellate relief, based on an overview of the court filings.

Meanwhile, a hearing is scheduled for Tuesday, July 14 to decide restitution for the victim.

UPDATED May 21, 2009: CHRISTENSEN AND SICKELS EACH SENTENCED TO 25 YEARS IN PRISON.

Though this doesn’t happen often enough to thug cops, it’s nice to see the system actually punish criminal behavior, no matter who you are. Far too often, cops claim “qualified immunity” or “quasi-judicial immunity” from any sort of liability for their behavior; and 99 percent of the time, they (literally and figuratively) get away with murder.

The victim in the case says she now suffers from post-traumatic stress disorder and feels uncomfortable in Creston “because of the media coverage and Internet blogs.” She says she cannot trust anybody and, based on message boards, “the town is divided about this case.”

No matter what exactly happened that night, the fact is these two clowns were POLICE OFFICERS, one of which was the chief of police, and should not have even been in this situation. They lied repeatedly on the stand, which is not necessary when you have nothing to hide. This case is a victory for all American citizens brutalized daily by police thugs who are usually rewarded with paid vacations (aka “paid administrative leave”) for this type of behavior. Good riddance and don’t drop the soap. 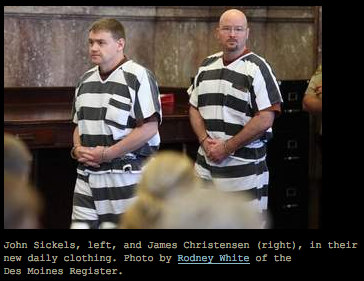 Though there are several more cops that need to be locked up for a long time, this verdict is a small, but necessary victory for the American people, who are victims of this police-state mentality in our country. I hope both of them are raped repeatedly in prison and hope this helps bring some closure to the victim (a civil suit will bring complete closure).

Christensen is also now saying he was taking a leak OUTSIDE while Sickels raped the victim. Wish these animals could at least get their stories straight. Watch the report from KCCI Channel 8  in Des Moines.

The more facts that come out of this case, the more sick and demented these two animals become. Christensen, in a taped conversation days after the rape happened, pretended as if the victim was fabricating the whole story, even though he was there and was one of the perpetrators. “I didn’t know about it,” Christensen said on tape. “I will look into it. Will you live with that? Please.” The victim’s boyfriend said he was going to kill them, but decided against it.

Christensen, for all intents and purposes, held the victim down, while Sickels raped her. Hope these animals know what happens to sex offenders in prison.

Former Creston (Iowa) Police Chief James Christensen and his former assistant chief, John Sickels, raped a woman at a country club on April 18, 2008, according to court documents. Sickels allegedly raped the woman while Christensen held the victim’s hand and stroked her hair. Both attackers were fired from the police force after an investigation, which resulted in both being charged with sexual abuse.

The rapist cops face up to 25 years in prison. The Creston Police were also investigated last year in the death of Ron Adkisson, a 59-year-old who died after Creston cops used a Taser on him. Christensen and Sickels’ trial was moved to Sioux City, IA after publicity compromised the chances of the alleged rapist cops getting a fair trial in Union County. Creston has a population of about 7,600 and is located about 80 miles southwest of Des Moines. 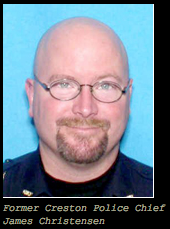 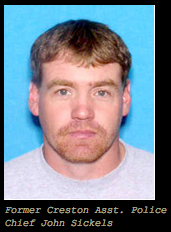 CRESTON, IOWA — Cop thuggery is the norm in the USA. Tempe (AZ) Police Department, Flint (MI) Police Department, LAPD, etc. But when it comes from the top, it’s all the more scary to the public. It’s unclear if Creston (IA) cops James Christensen and John Sickels were on-duty when they raped a woman that night. But either way, the maximum penalty is warranted here.

Stories from Creston message boards indicate the police department has had “good ‘ol boy” problems for quite some time. According to a blogger who calls himself “Trent Good” (and who says he was a former police officer in the town) and several others, the two alleged rapists became chief and assistant chief after leading a mutiny to have the former chief, John Wonderly, fired for trying to clean up the department. Wonderly was fired by former Creston mayor, Mike Tamerius, who publicly chided current mayor, Warren Woods, for firing the two alleged rapists. It is believed, according to the bloggers on Topix, that Tamerius is a part of the same “good’ol boy” network Christensen and Sickels belong to. Woods defeated Tamerius in a 2007 Election for mayor.

I’ve only passed through/hung out in Creston once in my life and have only met a couple of people from there – at the state wrestling tournament in high school. But the two “men” who ran this department illustrate that gangster cops exist not only in large cities, but quiet little towns in Iowa as well. The Creston PD has fewer than 15 officers who mostly are graduates from the local high school.

Paul Ver Meer, a Spencer (Iowa) High School graduate, was hired in September to take over as chief once Christensen and Sickels were charged with rape. 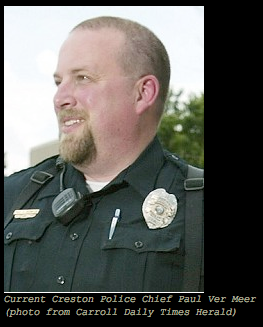 Ver Meer is a University of Iowa graduate with a degree in psychology, according to the Carroll Times Herald. He has no affiliation with the former “good ‘ol boy” network in Creston. For the sake of the citizens of Creston, I hope he is doing a good job protecting and serving their community.

Christensen and Sickels are likely being housed in Fort Madison, the Iowa State Penitentiary maximum security wing. They will hopefully experience the same thing the victim of their disgusting crimes did.