She apparently stole her grandmother’s car and drove it through the neighbor’s lawn just to make them mad. This is what happens when white thugs get white justice. They become lifelong criminals. But it is what it is.

She was the primary attacker in the video. Kayla Hassall received one year of juvenile probation. Charges were dropped against Cara Murphy, Zachary Ashley, and Stephen Schumaker.

The moral of the story is that you can viciously assault a kid and not serve ANY jail time. The White Chick Justice clause in U.S. courts is the damsel-in-distress card any white chick can play. The other “Barbie Boxers” get their sentences later this month. I should be a Las Vegas prognosticator for white chick sentencing in U.S. courts.

If you took the under (three months in jail) congratulations!

The last “Barbie Boxers” signed plea deals last week. They will be charged as juveniles. None spent more than a few hours in jail. The video will disappear, like it never happened. Must be nice top be white and female in the U.S. Justice System.

One of them pleaded guilty to false imprisonment and battery a few weeks ago. She could get five months in prison and/or five years of probation. She’ll be sentenced March 20. Stick with the under. 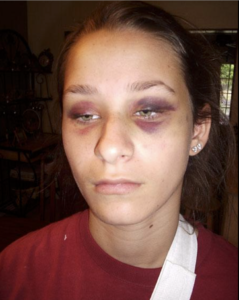 Victoria Lindsay after the beating.

MULBERRY, FL — The so-called “Barbie Bandit” got probation for federal bank robbery. Blonde pedophile Debra Lafave got probation for sex with a 14-year-old. We’re placing the over-under on the Florida thug white girls sentences at three months in jail. All the perpetrators involved in the March 30 attack go to Mulberry High School. Mulberry is located about 1o miles south of Lakeland. Place your bets!

We have “Runaway Brides” with long criminal records, “Ponytail Bandits,” (the link to the ABC News story is headlined “Illegally Blonde”) and “Barbie Bandits.” 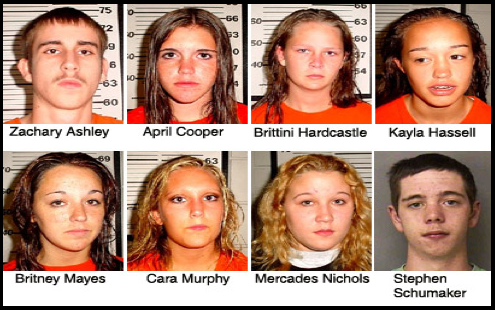 Dr. Phil backs out of interview

The circumstances in this case and the Jena, Louisiana case last year are strikingly similar. But the punishments and subsequent well-being of the individuals involved will be polar opposites. Murder is the charge for black kids in Jena. These chicks are getting the Smurfy, Rainbow Brite, “troubled teen” treatment.

Phil McGraw (aka “Dr. Phil”) bailed Mercades Nichols out of jail. I believe she is the one who arranged the attack on Victoria Lindsay in the video. The catch was that he gets exclusive rights to the story. McGraw changed his mind after some backlash. He said a potential story would “compromise his guidelines.” The judge issued a gag order on April 9 related to the case. That also may have played a role in Dr. Phil’s reversal.

This type of white chick on white chick crime is relatively rare. It puts the Florida white imperial government in a pickle. Kayla Hassall (spelled Hassell in some publications) doesn’t look white. She might get a harsher sentence than the rest of the girls. The two boys acted as lookouts. They’ll probably get a harder sentence than Nichols.

I have some advice for the girls and their lawyers. Make sure the girls are all prettied up. Stop at a hair salon for professional styles. Dying all their hair blonde would help immensely. Shed a few tears during each court appearance. Just tell them to poke their leg with a thumbtack if they can’t squeeze fake tears out naturally.