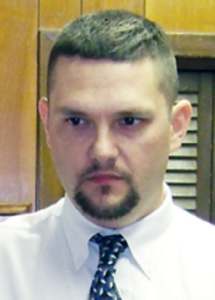 Former Oakwood (TX) Police Thug Oly Ivy, was the only officer and Chief of the small town police force.

Former Oakwood (TX) police thug Oly Ivy was fired from his position in April after being arrested for allegedly tasering his wife multiple times with his city-issued torture toy. Ivy had only been “chief” of the town’s one-man force since February – for two months. The town’s city council voted unanimously to fire him the night of the arrest. An indictment was handed down last Thursday, charging Ivy with “aggravated assault/family violence,” a Class 2 felony.

The victim of this thug’s crimes will have a strong, cognizable legal claim against the town of Oakwood. The city failed to run any sort of background check on Ivy before handing him a job with great responsibility, being he was the one and only face of the city’s law enforcement department. Ivy had been charged with domestic violence in Portsmouth, OH in December of 2003. The case was dismissed when the victim didn’t show for court. Ivy also had a very unstable work history. Ivy, 30, has been in law enforcement for seven years, for six different police departments in that time period. Oakwood city council members are blaming a Texas law enforcement commission for failing to run a background check.

Regardless, it looks like this clown will not be able to hide behind any sort of qualified or quasi-judicial immunity. I wish the victim a speedy recovery. She can also get solace in the fact it likely won’t be long, during Ivy’s prison stint, that he will get to feel what its like to be tasered himself.

UPDATE December 14, 2009: Victim of Ivy’s crimes objects to plea offer for him