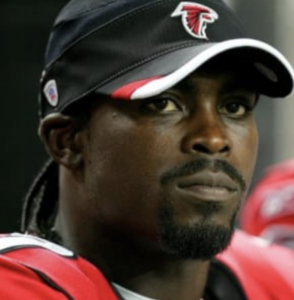 U.S. cops cooked their dogs to death in hot cars constantly. But they are after-thoughts to Euro-American media. Mr. Vick remains the prime target. This is divine entertainment for Surry County, Virginia “authorities” and white Americans in general.

This formality could be done via video conference. But “Judge” Campbell and the county attorney want the attention and potential career boosts. Everybody attacked auto industry CEOs when they showed up to congressional hearings in private jets. Surry County must pay to transport Mr. Vick from the Kansas prison to Virginia and back. Taxpayers are funding the publicity stunt by the judge and prosecutor.

Media coverage of this one-word Vick hearing will rival that of the Las Vegas O.J. Simpson verdict. White imperialists got revenge on O.J. for his acquittal in the 1990s. Virtually every network interrupted regular programming to report on Simpson being found guilty of the petty crimes in Vegas.

It is Mr. Vick’s turn for complete humiliation by this media. They want him seen in court by millions of people after he’s been in prison for more than a year. White people love dogs more than their own children in many cases. I pointed out in the “55 Days In Maricopa County Jail,” video several cops who broiled their dogs to death in hot cars. They are still employed with their respective departments and criminally clear. One of the cases resulted in a mere misdemeanor charge.

Why aren’t these cops who killed dogs being humiliated with the same passion? If dogs are really this precious to white people, their media and PETA, then the outrage would be equal. The dog-killing cops said they “accidentally” left their loyal dog partners in 170-plus degree cars for 10+ hours. The white public accepted this excuse.

Miami Dolphins linebacker Jerry Porter said it best: “all it was was dogs.” White media won’t attack Porter like they did Stephon Marbury and Terrell Owens on this issue. They know Porter doesn’t give a f***. Porter and others support Vick whether this media says its “correct” or not. Homogenization of media just make Porter’s view SEEM like the wrong ones ethically. But it’s not. White Americans view god as some kind of deity. Note, dog spelled backwards is “god.” Further, bestiality (sex with dogs, horses, etc.) is legal in several European countries. Let’s just keep things in perspective here.

Mr. Vick put himself in this situation, as did the aforementioned police. Cops are ethically liable for their crimes as well. But only Vick is made out to be a monster. Vick made the dumbest mistake of his life. He had no criminal record prior to all this. It’s simply fun and entertaining for the hegemony to build up a black man, then teat him down.

President-Elect Barack Obama is selecting new cabinet members every day. But Vick will still dominates the headlines on Tuesday. Judge Campbell and county attorney Poindexter are willing to dip into the coffers to force a Vick appearance. It is worth the publicity for them. These guys remind me of the infamous Anna Nicole Smith judge crying on the bench for attention.

Michael Vick will survive this

It also reminds me of California D.A. Tom Snedden and his crusade against Michael Jackson. It must be noted that Michael was ultimately cleared of all child molestation charges. It’s also reminiscent of that inbred Jena, Louisiana prosecutor going after the young men there.

Media ownership remains a Euro-Zionist monopoly. This the media known as “mainstream” is white media. They will always protect their own and crucify “others.” Stay up Mike! We support you 100%.