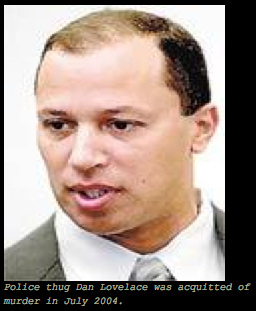 FLORENCE, ARIZ. — Only in America can a murderer get right back into the same type of job they had before killing another person. Former Chandler (AZ) police thug Dan Lovelace is a COP (Constitutionally Protected) thug. Thus he can murder anyone he wants without consequences.

Lovelace responded to a call at Walgreens in Chandler, AZ on October 11, 2002. Ms. Dawn Rae Nelson, 35, was trying to pass a phony prescription for muscle relaxers. Ms. Nelson tried to speed away when Lovelace pulled up beside her on his motorcycle, according to several witnesses. Lovelace fired a single shot, killing Ms. Nelson instantly while her 14-month-old baby sat in the back seat. The entire encounter lasted less than five seconds.

Lovelace was actually charged with murder, a rare occurrence in U.S. jurisprudence. The trial turned out to be an absolute joke. The defense attorneys should be ashamed of themselves. But this is Arizona.

They attacked Ms. Nelson relentlessly, calling her an “unfit mother.” They basically said she deserved to die because of her “felonious conduct.” Prosecutors completely failed to mention at trial that Lovelace was involved in another killing. Bradley Downing, a 19-year-old motorist, was killed in March 2000 after a reckless high-speed chase involving Lovelace.

But hey, who cares if Lovelace has killed (at least) two people and is a walking liability. He was hired by his old buddy from their days at the Chandler Police Dept., Pinal County Sheriff Paul Babeu. 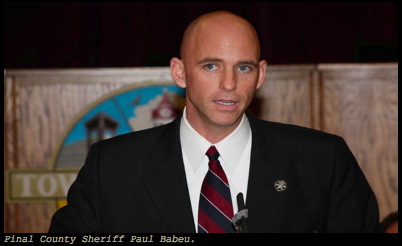 Lovelace works as a detention officer in the Pinal County Jail. The United States simply does not punish thug cops for murder and/or assault. I cannot find any instance, no matter how damning the evidence, a killer cop was sent to prison. It’s even more rare for them to be charged with murder despite killing Americans daily. But in the end, everything worked “like it’s supposed to” for Lovelace.

Oakland rent-a-cop Johannes Mehserle is currently facing murder charges after killing Mr. Oscar Grant in cold blood. But based on history, he will walk at trial or on appeal. Several witnesses will testify to the cold-blooded murder of Tyler Heilman. But it will be surprising if Le Sueur County (MN) police thug Todd Waldron is even charged in the case.

This is America. Thug cops are allowed to murder its citizens and get paid vacations. They then get new jobs as cops, and are worshiped like gods by the copsucking community. #Murica