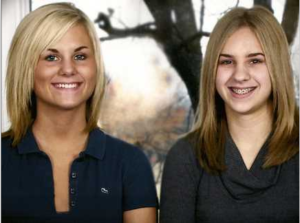 Ms. Jessica Uhl was 18, and her little sister Kelli was 13 when their lives were taken from them on November 23, 2007. All the while, the Illinois State Police killer cop who took their lives, Matt Mitchell, happily collected on his paid vacation…that is until last week.

Mitchell collected $160,000 in salary for sitting around on his fat ass for 28 months as a reward for killing these two young ladies. Illinois State Police are finally seeking to remove Mitchell from the payroll and officially fire him.

This all started on that horrible day in November of 2007, when the two sisters from Collinsville, IL – located in the southwest part of the state, along the Missouri/Illinois border – left their father’s home after taking some family photos. Jessica was going to drop her little sister off at their mom’s house before heading to work.

Instead, while driving on Interstate 64, their lives ended in a matter of seconds when police thug Mitchell, driving his patrol car at 120 mph, lost control, crossed the median, struck the Mazda the girls were driving head-on, and killed them instantly, according to the St. Louis Post Dispatch. Though Mitchell was apparently responding to an emergency situation, he was also playing around on the laptop in the car, and sending text messages to his girlfriend on a cell phone when he killed the two young ladies.

Twenty-eight months and $160,000 in paid vacation checks later, Mitchell pleaded guilty last Friday to two counts of felony reckless homicide and two counts of felony reckless driving. Of course, thug cop justice prevailed, as Mitchell was sentenced to a mere 30 months of probation for killing two people. Mitchell was previously involved in another crash while on duty in Peoria, IL, which resulted in a $1.7 million civil judgment.

Now that Mitchell has pleaded guilty to the crimes, Illinois State Police now feel they should  seek to remove him from the payroll, which should take effect within days. The Uhl family has also filed a federal lawsuit against the State Police. I understand the family wanted to move forward and put this behind them, which is why they agreed to the terms of Mitchell’s plea bargain (which also stipulates he can never do police work again). But Mitchell does not deserve to breathe the air in front of him, let alone be out walking free from prison.

The only issue left to follow is whether the State of Illinois will pay the civil settlements or if the money will actually come from Mitchell’s pocket. We’d put our money on the previous, being Illinois has already been paying this “officer” for killing two people he’s sworn to protect.

Our thoughts will continue to be with the Uhl family.