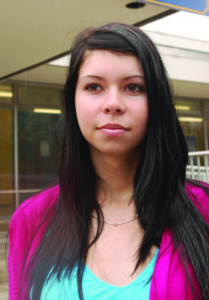 Here is the gist of this whole situation: Ms. McDonald wrote an article for the Temple News, the student newspaper for the university, after she did a ride-along with 24-year-old rookie cop William Thrasher. He patrolled the 22nd District in Philadelphia, a predominately non-European area of the city. 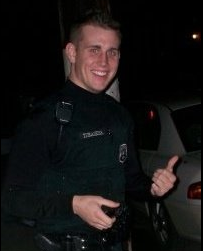 I assume this thug cop was trying to hit on Ms. McDonald and trying to impress her with his inbred whiteboy rhetoric. The entire article has since been removed from the Internet, but two quotes stuck out from the report. First, thug Thrasher, in referring to the citizens of the district, told Ms. McDonald, “these people are fucking disgusting. It’s like they’re animals.” He then made a report of “T.N.S.” to his commanding officer after responding to an argument at Arthur’s Dog House in Germantown. T.N.S. is a commonly-used Philadelphia Police code which stands for “typical nigger shit.” It’s more like T.C.S. – typical cop shit.

Philadelphia, the alleged “city of brotherly love,” has long been home to one of the USA’s dirtiest, terrorist police forces in history. Protestors gathered in front of the Fraternal Organization of Police headquarters in Philadelphia on April 20 because at least 36 unarmed black men were murdered by thug cops in the city between May 2008 and April 2009.

Police thugs in Philadelphia have no qualms about brutalizing European Americans either. Most recently, Philadelphia cops attacked band members and tour managers after the annual Bamboozle Road Show tour stop at the Theater of the Living Arts on April 26.

A few Philadelphia cops have been killed in the line of duty. But that simply comes with the territory of being a cop, or taxi driver, or store clerk, or other occupation that you are exposed to the general public. The numerous, unpunished, “qualified immunity” murders these cops commit keep the white copsucking community happy and worshiping cops like gods perpetually.

Philadelphia is also the city Mumia Abu Jamal allegedly shot and killed a cop back in December of 1981. Millions of supporters, including Oliver Stone, John Landis, and Susan Sarandon, protested loudly and got Abu Jamal’s death sentence overturned in December of 2001. Everyone knows Philadelphia police are terrorists and Abu Jamal was in defense mode. He was also named an honorary citizen of Paris, France in 2001. The city of St. Denis in France named a street for Abu Jamal on April 29, 2006.

Of course, this thug Thrasher has his supporters among the copsucking community. He set up a Facebook page (now defunct) that currently has about 2400 “supporters” of him. Virtually all of the comments left by his [all-white] supporters are attacks on Ms. McDonald, attacks on “liberals” (I’m not even sure what that means anymore), and attacks on “blacks.”

Ms. McDonald deserves far more praise, credit, and accolades than just this one article. As a reporter, you call it like you see it and/or hear it, which is exactly what she did. It’s obvious thug Thrasher hates “niggers” so much that he’s stupid enough to tell a reporter about his feelings. Ms. McDonald’s efforts turned into action, which subsequently got Thrasher and four other thugs fired from the Philadelphia Police force in April.

This young woman, with one article and no political power, did more than alleged “black leaders” Al Sharpton and Jesse Jackson (with a lot of power) have done since the turn of the millennium. Ms. McDonald has never been “anti-police” and did not ask thug Thrasher to destroy his career by chimping-out in front of a journalist. Thrasher is a proud “nigger hater” like the Limbaugh’s, Lott’s, and Mark Sanford’s of the world and wanted everyone to know about it.

Ms. McDonald displayed true journalistic integrity, bravery, and honesty. She could have easily succumbed to her likely “all cops are good people” beliefs and edited her story to make thug Thrasher look proverbially good, as Euro-American media do all the time. There are still hundreds of thousands more thug Thrashers out there. But this young woman did her small part in cleaning up the Philadelphia cop cesspool. She may have saved several black people from this animal Thrasher, who was impatiently waiting for his opportunity to say “that black was resisting” and “my life was in danger” so he could murder someone’s son, father, or brother, brag about it, and get paid vacation.

Ms. McDonald said she does not want to be known as “the girl who wrote the story about the cop.”  But to virtually all black folks and Latinos, if she introduced herself that way, she is very likely to get hugs, free drinks, hand shakes, and endless encouragement. We assume she graduated from Temple this month and is well on her way to being known as a great journalist, copy editor, or whatever she chooses to do. But with her ability, ambition, and (with the shallow U.S. media) looks, we’ll all see her very soon reporting for CNN, MSNBC, or ABC News. In the meantime, cheers and enjoy your summer.

2 thoughts on “Hero Of The Month (April): Shannon McDonald”