Williams played for the Sun Devils from … Read Entire Article

There seems to be this perception that I, and most other Nubian American men, look at all police officers the same. We hate them all. We look at them all, in general, as thugs, terrorists, racist whiteboys, and house negroes. I cannot think of anything more false than that premise. In fact, when I was in high school, my friend Ross and I always dreamed about being “crime fighters” (police officers) in the daytime and working at a video store at night, so we could always watch as many movies as we wanted to for
… Read Entire Article

Confederate justice is well underway in the “manslaughter” trial of Winnfield, Louisiana killer cop Scott Nugent, which jury selection started this past Monday. District Attorney R. Christopher Nevils filed a motion to change the venue of the trial, wanting to move it to the “whitest” jurisdiction possible. Nevils wrote that all potential “black” jurors are “tainted” because of pre-trial publicity of the January 17, 2008 cold-blooded murder (Note: thetowntalk.com link is now defunct).

The motion also asks the Court to … Read Entire Article 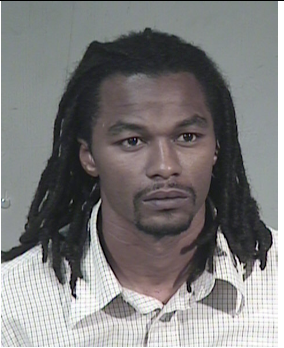 Mr. Kyran Jones
Kyran Jones, 28, was sentenced to seven years in prison by a Maricopa County Superior Court judge on October 24, 2008 for “assaulting” Tempe Police Sgt. Mike Horn. Horn was the Tempe Police public information officer when the original employment application of Tempe Police Chief Tom Ryff mysteriously disappeared after being requested by the East Valley Tribune.
According to tempepolicecloset.com, an online forum of current and former Tempe police officers, Horn told the newspaper that the application had been
… Read Entire Article
by Brian A. Wilkins
2/2/2009

Another day, more milestones. Today, after work from the U of Phoenix, I would have been on my way to Las Vegas. There was this high-stakes fantasy football league I was going to enter. I’d specifically saved up for the entry fee for months since it wasn’t cheap. But I looked at it as an investment; a fun investment which I felt very confident in getting a return. But, like everything else, it doesn’t matter now. I have absolutely no idea what’s going on in the
… Read Entire Article
by Brian A. Wilkins
2/2/2009

This day corresponds with Friday, August 29. I’m trying to get as many of these published as possible. With the Notice of Claim being served on Tempe Police and the research I’ve been doing in the event I’m forced to file a federal lawsuit (and the fact I’m virtually homeless) I haven’t had the time to get these done.

The longer I am in here, the more at a loss for words I become. This has now become a battle of attrition. I’m mostly battling myself and my will to survive. I
… Read Entire Article

After a SECOND mistrial, Dymond Larae Milburn, now 15, will no longer face charges of assaulting Galveston, TX police officers. The whole case was ridiculous to begin with and once again, the thug cops will get off without facing any criminal charges. The only justice young Dymond may get will be in civil court. All I know is that if I had a daughter and thug cops or any other thugs that attacked her that way, all of them would have … Read Entire Article

Ever been pulled over by Tempe Police? Did the arresting officer grill you about possibly being under the influence of alcohol…even though it was 1 p.m. on a Tuesday afternoon and you were only out driving because you were on your lunch break from work? Perhaps it was the end of the month and the potential arresting officer had not filled their quota for DUI arrests for the month.